In his now classic book The Tyranny of Distance, first published in 1966, Geoffrey Blainey asked his readers: ‘Were aircraft ever as miraculous as the first Australian mail steamers which were faster than any other form of passenger transport and carried the latest news as well? Did aircraft shape the lives of Australians more than the network of railways in the nineteenth century? Were aircraft in their first half century ever as miraculous as the international telegraph which conveyed messages and news faster in the 1870s than the latest aircraft can carry them?’.[i] For Blainey, the answer to all these questions was a vaguely qualified no. This perhaps explains why he only devoted 7 of the 365 pages of his book to the rise of aircraft. Many, however, would disagree with his assessment. 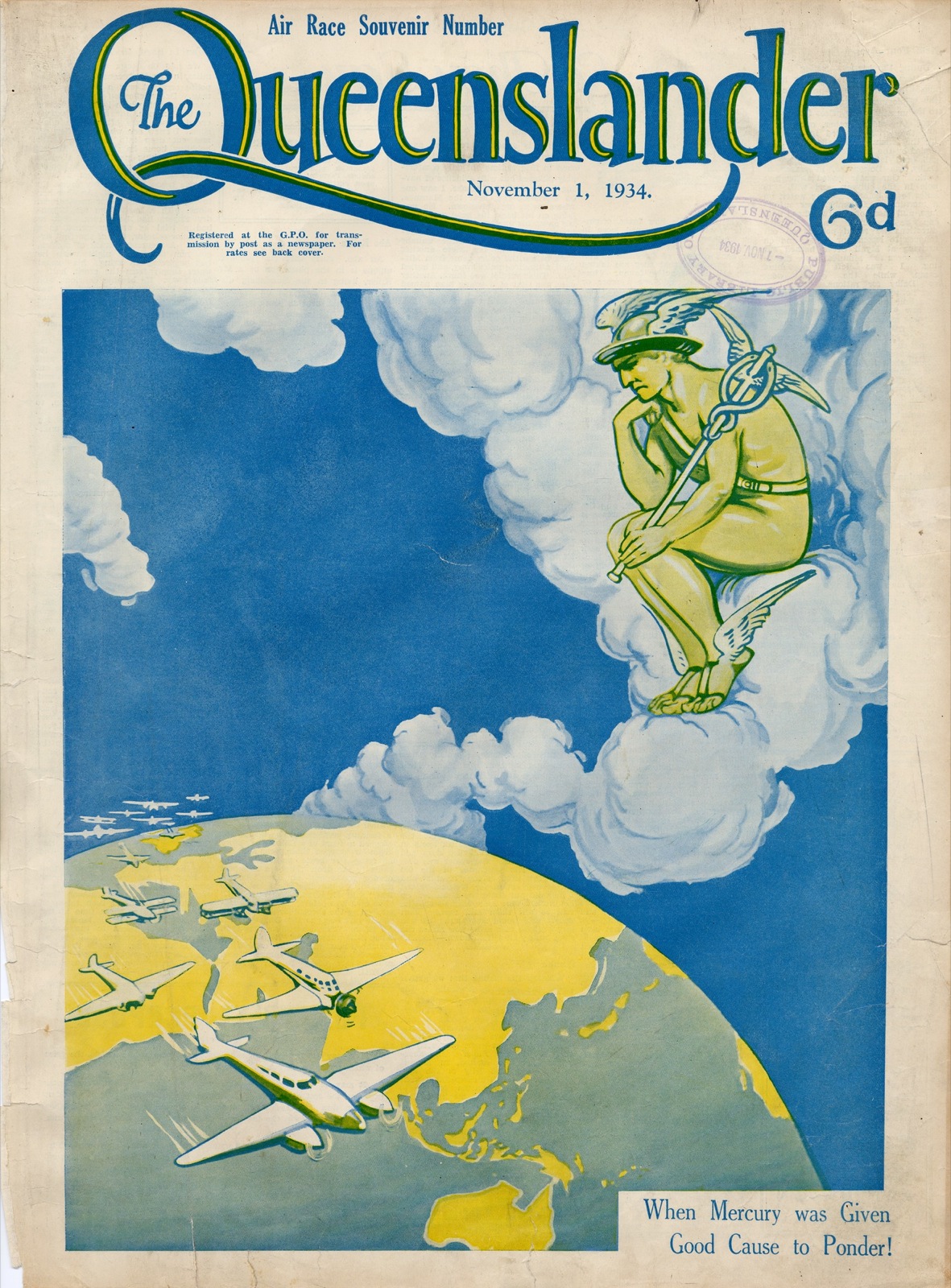 The Tyranny of Distance is essentially a work about the nineteenth century. In terms of modern inventions, it concentrates on the first surge of change in Australia brought about by railways, steamships and the telegraph. The rise of civil aviation was part of the next phase of technological innovation which occurred in the late nineteenth and early twentieth century primarily around the development of aircraft, cars and radio.

In his book Wings to the World, Hudson Fysh, early Australian aviator and chairman of Qantas until 1967, wrote that his generation in the industry had been ‘dealers in time and space’, ‘lifting our former isolation and enabling us to take our part in world affairs’.[ii] Aircraft increasingly shrank space as they became faster, reducing isolation. Reporting on the 1934 MacRobertson Air Race that had been won by Campbell Black and Charles Scott, the Argus wrote that:

In the [eighteen] ‘sixties Melbourne was 70 to 100 days out from England; a few years ago it was six weeks distant; and in 1926 Sir Alan Cobham opened up a new vista by reducing the time to 27 days. Sir Charles Kingsford Smith made it in 12 days in 1929; and two years later Scott flew to England in 10 days. But the air race has made those flights, valuable as they were as pioneering achievements, seem like leisurely strolls. Where pioneers walked, Scott and Black ran.[iii]

As Graeme Davison has noted, in two generations, people went from measuring international travel time from weeks, to days and finally to hours.[iv]

Domestically, remote communities were to benefit enormously from developments in civil aviation. In 1926, the Royal Flying Doctor Service (RFDS) was established as a partnership between the Australian Inland Mission and Qantas. Championed by the Reverend John Flynn, the RFDS was the world’s first aerial medical organisation. Its first flight took off on 17 May 1928. Later, Ernestine Hill was to write that ‘the most elegant cry for the Flying Doctor is a silent one – the station graveyards and the little graves’ that were scattered throughout outback Australia.[v] State Department of Health Nurses began to work on the RFDS planes not long after the commencement of the service and in 1947 it employed the Service’s first nurse. At the end of the twentieth century nurses – mainly female – were performing around 85 per cent of health care as sole practitioners. Nurse-Doctor teams were used in emergencies. At this time the service was flying around 8.8.million kilometres a year, servicing 155,000 clients, 14,500 of which needed to be hospitalised.[vi]

Horsemen at the aerodrome to see the Duke of Gloucester's arrival, Charters Towers, Queensland, June 1946, Photograph by Alfred Amos (National Library of Australia)

Other services followed. The Aerial Medical Service, operating at the top end of the Northern Territory, was set up in 1943. Established in 1924, the Royal Far West Children’s Home developed an aerial transport service in the 1930s and lobbied the NSW government to construct airstrips. Nancy Bird-Walton was employed to run this aerial scheme in 1935.[vii] Angel Flight, an Australia charity that provides health care, was established it April 2003. Its founder, Bill Bristow, was awarded a Member of the Order of Australia in 2009 for services to rural and remote communities.

Civil aviation was to have a significant impact on only a small numbers of Australians in terms of isolation until late 1960s. It did, however, for many years serve to heighten White Australia’s sense of remoteness from the Mother country and, from World War Two, the United States as well as its precarious position in Asia. Qantas, for example, did not commence its first services outside the Empire until just after it was nationalised in 1947. In 1978, advertising executive and broadcaster Phillip Adams remarked: ‘It’s enormously encouraging to see more and more of us queuing at Customs at Mascot or Tullamarine with our cartons full of trannies and Johnny Walker bought at a useful discount in Singapore. It show our growing sophistication and our ability to come to terms with our Asian destiny’.[viii]

Isolation by definition is hard to represent through physical items; photographs and personal accounts provide a more direct path of access to this story.  Collections of this type at the NMA, the NLA and the major state archive collections are potential sources. There is undoubtedly more important privately owned material still to be identified and collected. It is also reasonable to view items associated with the 1919-20 air race as part of this story, in that the race was held to establish direct and rapid aerial communication on a route where sea travel took weeks or months. The Australian War Memorial (AWM) holds a DH9 aircraft that completed the gruelling trip, and the winning Vickers Vimy is preserved in an individual case at Adelaide Airport. The work of the RFDS is also relevant to this theme and is represented in a range of state and local collections.

Material relevant to this theme that is held within established collecting institutions is mostly both accessible and well cared for. It is anticipated that many privately held items will be found through the course of this research which may be vulnerable to loss.

[vii] Nancy Bird-Walton, My God! It's a women: the autobiography of Nancy Bird, Angus and Robertson, North Ryde, 1990.