The rise of modern aviation coincided with the formation of the Australian nation in 1901 and it has been intimately connected to the construction of national and other identities. 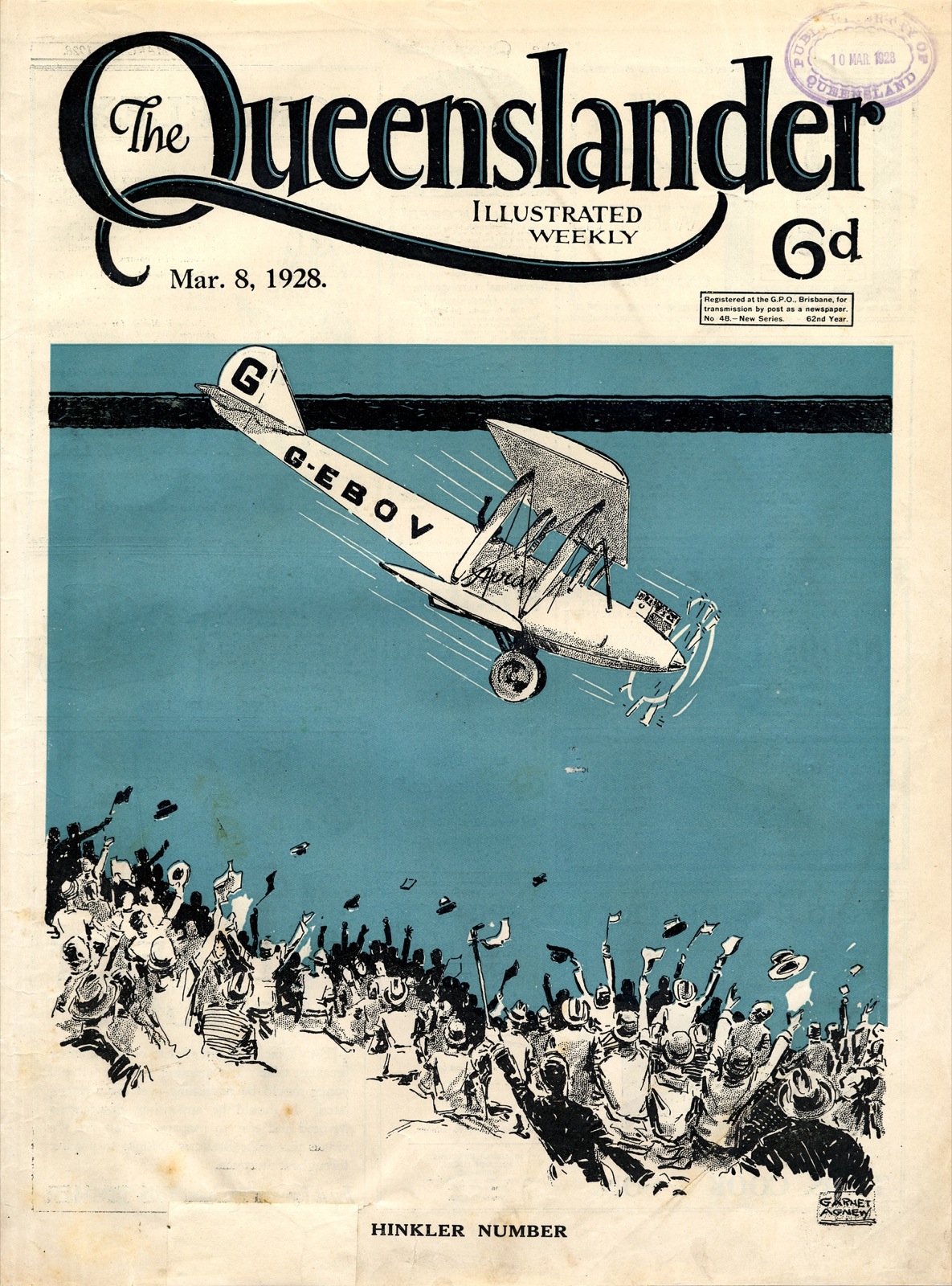 Early aviators were assimilated into and reinforced the pioneer legend. Rising in the late nineteenth century, this is a ‘nationalist legend’, as John Hirst has written, ‘which deals in a heroic way with the central experience of European settlement: the taming of the new environment to man’s use’.[i] Thus while selectors, small holders and, later, soldier settlers strove to establish modern agriculture – which only happened in the twentieth century with dire environmental consequences – aviators sought to conquer air, space and time.

Only weeks after completing his fifteen-day solo flight from England to Darwin in 1928, Bert Hinkler made a two-sided gramophone recording. One side had on it ‘My message to Australia’ which championed the ‘gospel of the air’. Acknowledging Lawrence Hargrave as a ‘great pioneer’, Hinkler told his fellow Australians that:

"It was like all other pioneering work; it was hard. There were the usual sacrifices and setbacks and scares, but aviation went from success to success, from strength to strength. Today, the experimental stage is long past. Flying is a definite improvement factor in transportation. Like other methods of transport, there may be minor disadvantages, as well as its advantages, but we are getting on. Each year sees more aeroplanes, better aeroplanes and greater public interest. I venture to say that in 20 years’ time, the aeroplane will be almost as familiar a figure in our scheme of things as the motor car is today…

Aviation has a lot to thank Australia for: Hawker, the Smith brothers, Parer and McIntosh, Sydney Pickles and Kingsford Smith, and many other excellent pilots you have right here in your own midst. These good Australians have done, and are doing, big things in the air. And I am quite sure that there are many other Australians who will carry on the good work…

Flying must come into its own in the Commonwealth. Only one thing is necessary – the goodwill of the public. With this assured, and the feeling is growing stronger every day, Australia will prove itself as great a flying country as Australians have proven themselves flyers."[ii]

Other pilots were to make gramophone recordings of accounts of their flights. And various popular songs and tunes were written and recorded to honour both aviators’ feats and their inspiring Australianness. There were several to Hinkler, such as ‘Hustling Hinkler’, written by L. Wolfe Gilbert and Abel Baer soon after his arrival in Australia. Songs about other aviators included ‘Kingsford Smith, Aussie is Proud of You’, recorded by Len Maurice in 1928.[iii]

Flying women, too, were to be part of the pioneer legend from the 1930s.[iv] And like their counterparts in countries such as New Zealand, they contributed to the formation of a distinct national story concerning Australian identity.[v] This narrative grew in the context of technological innovation and an evolving modernity. But other identities were also to be shaped.

The first female flight attendant was 25-year-old American registered nurse Ellen Church who talked her way into working for United Airlines in 1930. During 1935, Royal Dutch Airlines (KLM) employed its first airhostesses. In the following year Marguerita Grueber and Blanche Due became Australia’s first airhostesses. These ‘pioneers of this new career [for women]’, as the Cairns Post put it, flew with Australian National Airlines for the Bass Strait crossing. The airhostess required particular qualities:

"Besides an attractive personality, a knowledge of first aid, short-hand and typing, cooking [to prepare a meal for passengers if planes should need to land on an emergency field], an encyclopaedic understanding of countries and their attractions to tourists, and a good voice in which to tell people what they want to know, airhostesses must be lightweights – 9st. 7lbs. is the maximum for the Australian lines; and the American limit is less than that."[vi]

The gendering of work in civil aviation prior to the jet age mass transit boom was to give rise to a public perception of a ‘world of airline glamour’ in which the airhostess was sexualised.[vii] Material remains of this can be found in female uniforms. Recruitment practices also reinforced the White Australia policy in the air. One Australian newspaper explained that in America the airhostess was ‘one of the most attractive features of a highly developed system of travel’:

"Susceptible businessmen find it pleasanter to be ushered into an aeroplane by an airhostess than into a railway train by a Negro Porter."[viii]

All of this was reflected in advertising, popular literature – such as the successful American Vicki Barr Flight Stewardess series which was published between 1949 and 1964 – film and, after 1956 in Australia, television. Between 1933 and 1934, Australian audiences could view the film ‘Air Hostess’, a pacey, B-grade film starring Evalyn Knapp and James Murray which captured much about the first few decades of the industry.[ix] It was billed as ‘A story of sky-high romance’. In 1950 in the comic series Batman, it transpires that the voluptuous Catwoman is an airhostess with amnesia caused by a head injury she received in a plane crash.

The industry’s first flight attendants, however, were men. The ratio between men and women grew to be not so disproportionate into the 1950s. But women came to dominate as flight attendants in the 1960s.[x] The Gay Liberation Movement reversed this trend from the 1970s, though this was to reproduce stereotypes of gay flight attendants such as those presented in Australian comedy sketch series Fast Forward.[xi]

Today the National Film and Sound Archive of Australia has a National Registry of Recorded Sound. Of the 84 items on the Registry, three relate to civil aviation. The first is ‘Hinkler’s Message to Australia/ Incidents of My Flight’ (1928); second, the Aeroplane Jelly song (1939); and third, Peter Allen ‘I Still Call Australia Home’.[xii] A hit in Australia in its own right, Allen’s song was critical to the enormous success of the Qantas advertising campaign which ran from 1997 to 2009.[xiii] This campaign put a multicultural face on Australia’s national identity and its national carrier. The campaign ended, however, at a time when ‘pride in the flag and strong national loyalties’ to national carriers had been seriously eroded by economics.[xiv] But this has not diminished the significance of civil aviation to national identity and nation building.

Indigenous communities and culture has also been profoundly affected by aviation. Aircraft provided rapid contact with the outside world, and the possibility of movement between remote communities. The improved delivery of health and education services to indigenous communities was particularly significant. The participation of indigenous people in aviation is still relatively unexplored.

Many Australian collections include examples of travel posters and advertising, retailing the romance and accessibility of flying. Numerous relevant artworks are publicly accessible in galleries such as the National Portrait Gallery and the National Gallery of Victoria, and the Neville Shute Library is devoted to the work of this notable engineer and novelist. Library collections across the country hold both personal documentation and monographs tracing the careers of important individuals. The National Film and Sounds Archive (NFSA) has a vast array of newsreel footage, interviews, musical recordings and even feature films dealing with Australian aviation.

The role of Aboriginal and Torres Strait Islander people in aviation and the broader role of women in the aviation manufacturing industry are both largely unrepresented through heritage collections and places, and there is a paucity of extant cultural materials relating to these stories. This is an area that could very effectively be explored via oral history programmes and personal stories, material which is ideal for public access via a portal.